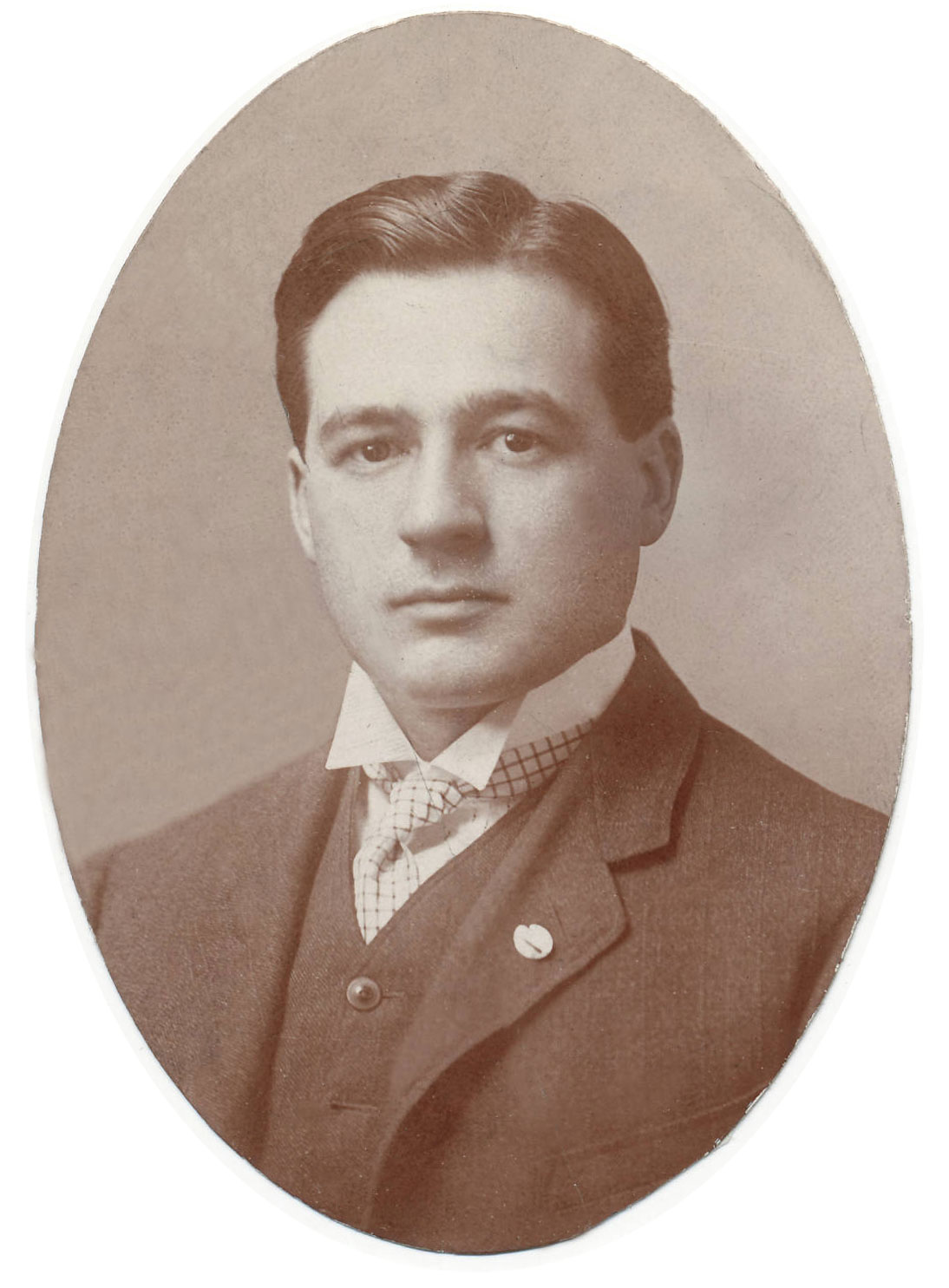 By His Friends from The Educator, 1932

The Educator has always believed in the policy of complimenting those who have devoted their lives to the promotion of penmanship, and has from time to time paid special tribute to various members of the profession. The interest which this material arouses, as indicated by the appreciative letters which we have received from our subscribers from time to time, makes us feel repaid for the effort and money spent in collecting the information and penwork and making engravings.

Unfortunately, space and money do not permit our paying tribute to all of the fine men and women who are serving the profession and who deserve special recognition.

We hope that the work which we are presenting this month from the pen that skilled penman and teacher, M. A. Albin, will inspire young men and women to turn to penmanship for profit and recreation that it will show how penmanship will enrich their lives as it has that of Mr. Albin; also that it will show that penmanship as a business offers substantial returns financially. We also hope it will stimulate the old timers on to higher attainments. — EDITOR.

The subject of this sketch was born October 25, 1877 and reared on a small farm in Elkhart County, Northern Indiana, near the town of Nappanee, the childhood home of H. B. Lehman, the well known penman of St. Louis, Mo. His father was of Scotch-Irish stock—American since pre-revolutionary times, and his mother was of German descent. His entire minority was spent with his parents on the farm.

He first attended the rural schools and the high school of Nappanee. Being bent on getting a higher education he attended Northern Indiana Normal School. As a youngster, he was a voracious reader, and missed no opportunity to read a good book. By the time he was fifteen he had read most of the classics, and has been an extensive reader since.

Mr. Albin became interested in beautiful penmanship at about the age of fifteen, a love for it having been inculcated by his mother who was a skillful penman herself. He had little opportunity to indulge his liking for penmanship, as materials were expensive and pennies scarce. Nevertheless, this did not deter him from his ambition to become a penman.

One of his early teachers gave him his first idea of modern movement writing, and fired in him a determination to become a real penman. This ambition was further stirred by a few lessons given by an itinerant penman. Young Albin kept pressing forward, missing no opportunity to improve his writing or further his eduction in other lines.

Being ambitious to carry out his plans of many years, of becoming a professional penman, he planned to attend the Zanerian Art College, Columbus, Ohio. To make it possible to attend this school he borrowed the necessary money from a neighbor farmer who placed implicit faith in young Albin. With everything in readiness, he entered The Zanerian Art College in January, 1899. While there he worked diligently and made an enviable record.

On leaving the Zanerian, he accepted a position with the Topeka Business College and remained there for two years. He has been engaged in penmanship since that time except for a brief period or two. From the first, he has held some very responsible and exacting positions, filling each in a very satisfactory manner. The keynote of his life has been service of the highest order. After nearly thirty years of service he is actively engaged in penmanship and commercial education, being at present connected with the Draughon’s Practical Business College of San Antonio, Texas.

Mr. Albin has held positions in many parts of the United States. He was at one time with the McTavish Business College, Edmonton, Alta.

As a handwriting expert, Mr. Albin has had quite a bit of successful work in the United States and Canada. He is proficient in all lines of pen art and engrossing. He may well be considered about as near to the top of the penmanship ladder as any of his contemporaries. For a large number of years he has been contributing fine penwork to The Educator. He is one of our most versatile penmen, being very individualistic and original in his work.

He is happily married and has an ideal home. Much of his success is attributable to his wife who has been his chief inspiration and constant helper. He is the father of three children—a son, nearly twenty, and earning nearly as much as his dad, and two very self-assertive youngsters of the feminine gender.

Summing up the many sterling qualities of this penman and educator, it is evident that he could have succeeded in nearly any line of human interest. He is a man of thoroughness, tact and daring. In his life are exemplified culture and refinement in their noblest aspects. He is a liberal minded man of the Protestant faith; a teacher by training, endowment and choice.

His splendid contribution to the penmanship profession are worthy of the highest commendation and admiration. He has helped many young people along on the road to better penmanship. Young people should see in the work and accomplishments of this master craftsman a strong incentive to nobler achievements. 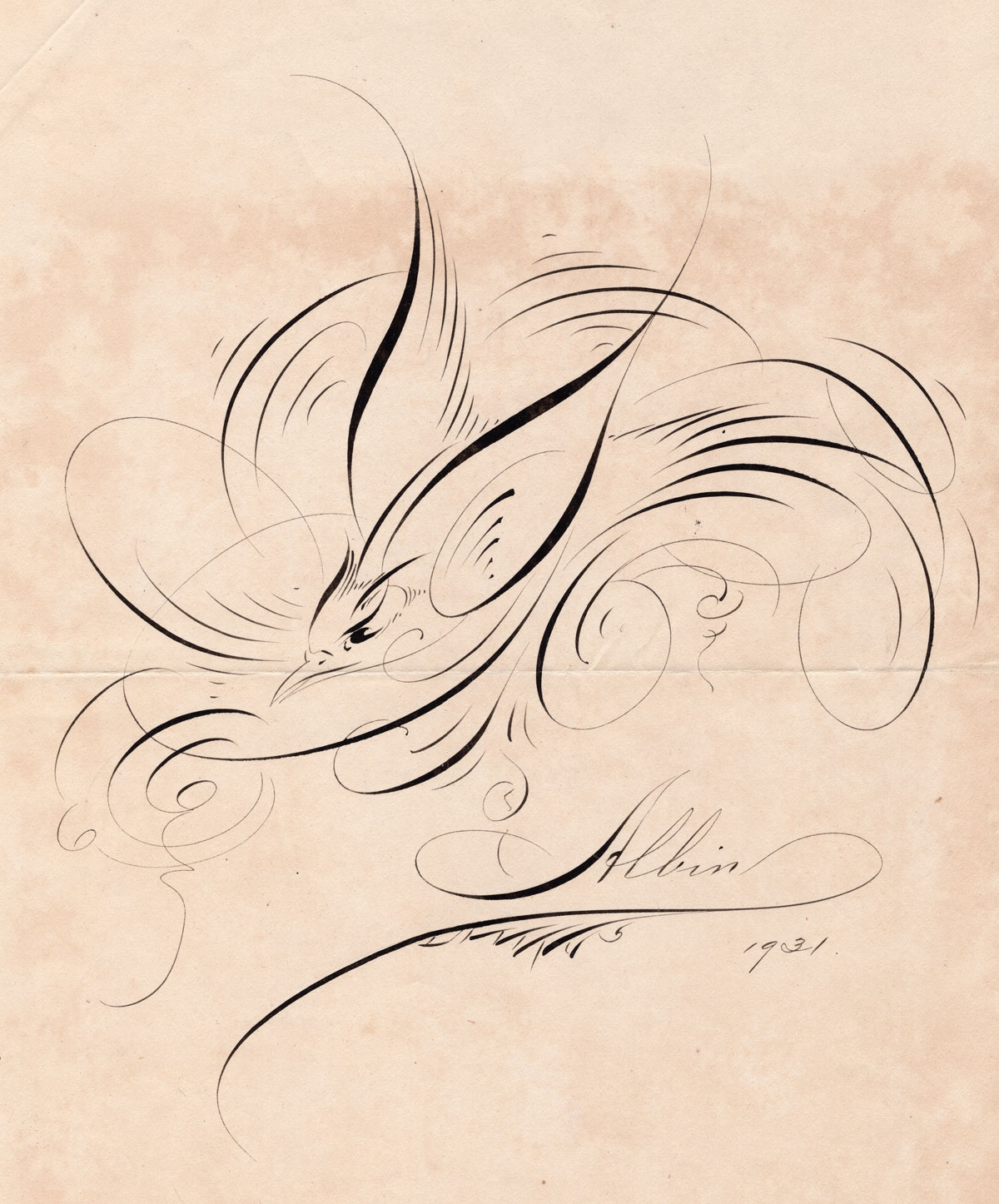 M. A. Albin Offhand Flourishing specimen from The Bartow Collection

His skill was outstanding at an early stage of his career. As his studies progressed this skill was still more manifest, and with the passing of years it has not been impaired, in fact it has become more masterful and inspiring. — W. H. Morgan. A personal friend of Albin’s from The Zanerian College.