Engrosser’s Script is a style of calligraphy that was widely developed and produced during the late 1800s and early 1900s in the United States of America. Its core characteristics are similar to its primary influence—a number of English handwriting variations known collectively as “English Roundhand”.

Generally, Engrosser’s Script is a visually-cursive Latin-based calligraphic script executed with a steel pen point inside of an oblique penholder. The forms are generally forward-leaning 35-40° from vertical, although more extreme varieties in each direction may occur. 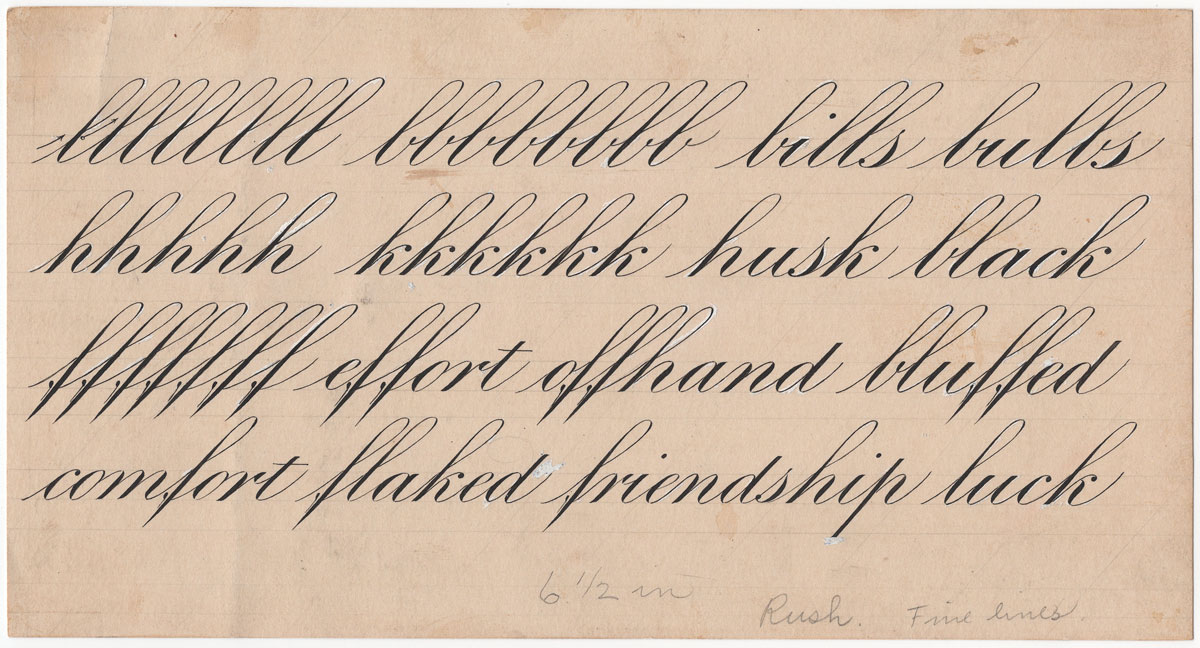 Engrosser’s Script differs from its predecessor in a few unique ways:

These three characteristics can be used to deduce the nature of specimens of early American writing. With modest effort, one can become acquainted with the intricacies and nuance associated with ES. After this, various smaller natures—unique to ES—become useful in the further classification of the various eras of shaded American writing. 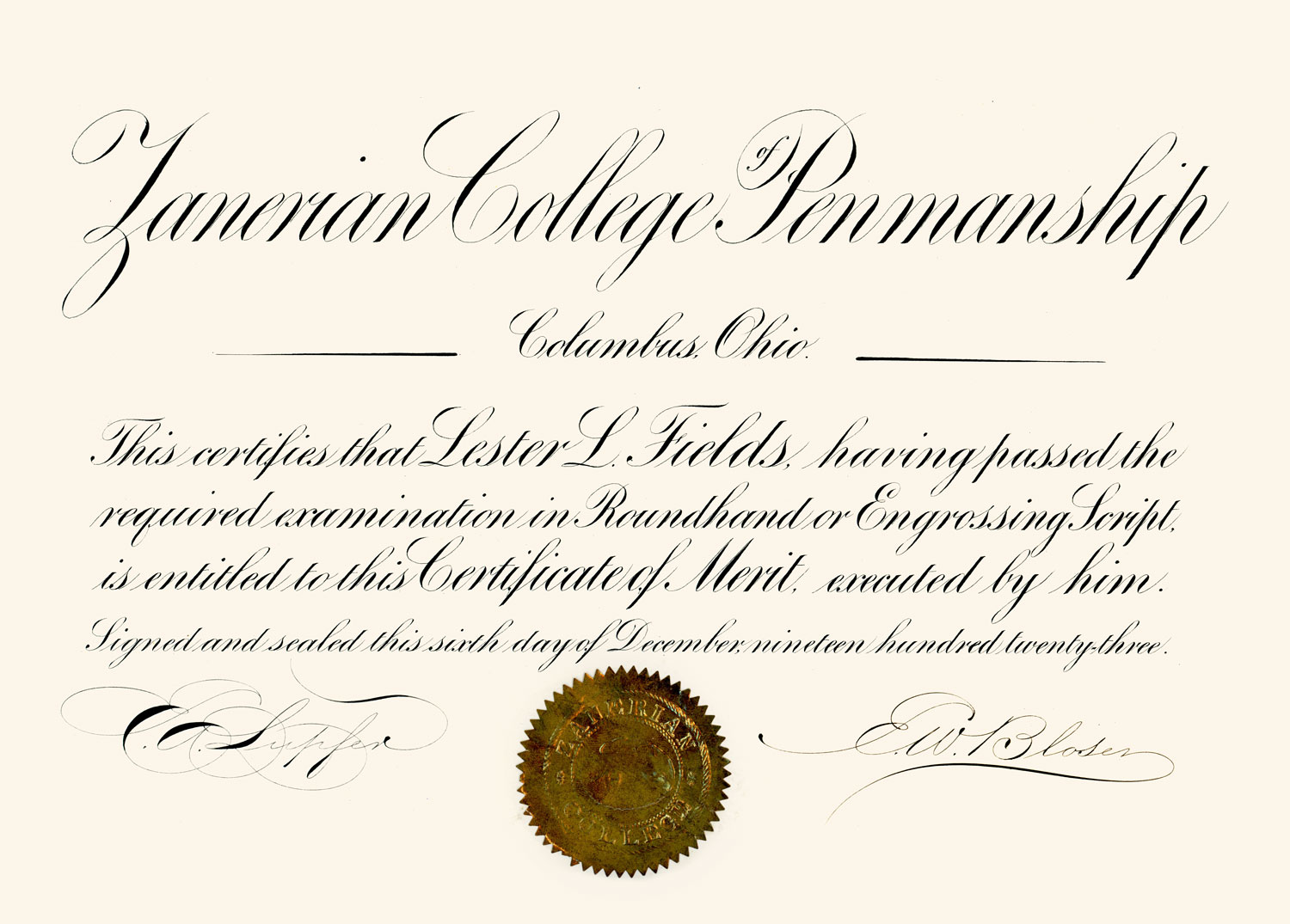 Let’s take a high-level look at some of these terms and discuss their various merits as placeholders for the term in question.

The term ‘Roundhand’ functions best when used as an umbrella term for a variety of different styles of calligraphy. When compared with ‘ES’, the most commonly pictured type of Roundhand is English Roundhand, which is the direct English predecessor to the Engrosser’s Script utilized in America.

It should be noted that during a transitional time in the development of Engrosser’s Script, both “Roundhand” and “Engrosser’s Script” were used in the influential work of E. A. Lupfer titled The Zanerian Manual (1924). Thus, one is not incorrect to use the term in reference to ES, there are simply more accurate terms.

To learn more about the evolution of round writing in England, prior to the development of Engrosser’s Script, see The English Writing Masters and Their Copy-books (1962).

A term used frequently by penmen of the early 20th century is “Engraver’s Script”. This choice of words is in reference towards the various engraving companies that employed large amounts of modular shaded script in their designs for insurance policies, stock certificates, currency, etc. This phrase was further solidified by the titles such as Lessons in Engraver’s Script Penmanship (Jones, 1911) and Lessons in Advanced Engraver’s Script (Pub. Jones, Plates by Madarasz & Martin). The first of which shows several condensed letterforms consistent with the styles commonly used in materials such as those listed above. The second includes shaded capital letters executed in an ornamental style and a more rapid method of execution.

Being that these two influential publications show disparate styles, we must accept that the term is somewhat confusing from a historical standpoint, as it shares many of the same problems as any other style whose name means so much in general that it points to nothing in particular.

“Engraver’s Script” is an acceptable synonym for “Engrosser’s Script” if one’s approach to the style is through the engraving discipline, study of paper ephemera printed from hand-cut engravings, or any publication like the two listed above that distinctly call the style “Engraver’s Script”—such as the W. A. Baird lessons popularized in The Business Educator.

The term ‘Copperplate’ has long been used in connection with fancy cursive handwriting, but the merits of conflating the term with Engrosser’s Script fall short on two simple principals. 1.) Copperplate is already a term used in connection with the Intaglio printing process, which can be used to print any variety of designs, including pictures, text, technical drawings, etc. 2.) Over the last three quarters of a century, Copperplate has been used as a contemporary term to include all variety of shaded round writing, and thus includes so many styles in general that it no longer accurately defines anything specific.

While there are various names commonly used in place of ES, we must be discerning when we select which term(s) we choose to use to refer to our own practice or in conversations with others. There are distinctions between various names, and fostering deeper understanding of the origins of such names helps to preserve the history and unique qualities that make Engrosser’s Script such a beautiful and worthwhile pursuit.

To learn more about Engrosser’s Script, there are multiple avenues that someone new to the art of calligraphy can take. On this site, we have several books with samples of script that can be copied and worked out through common sense and exploration with the oblique pen.

Then, there’s the The Zanerian Manual which has stood as a lighthouse for those looking to get started with the script for over 100 years.