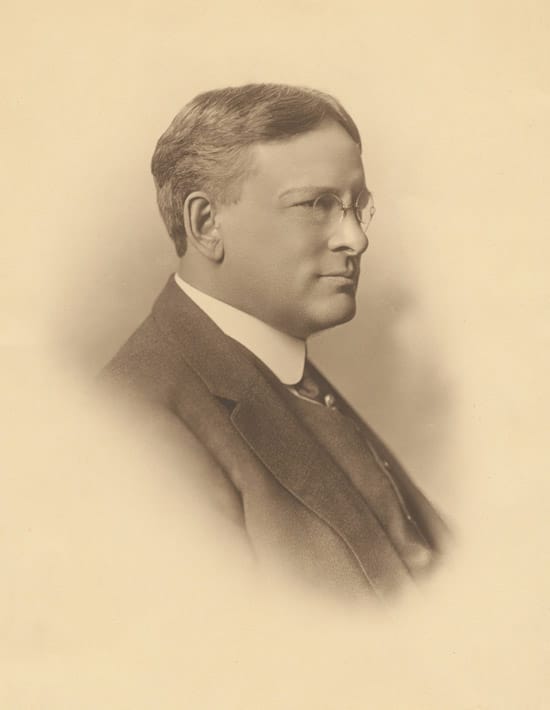 The past century has known three outstanding figures in the cause of good writing,—Platt R. Spencer, Charles Paxton Zaner, and Austin N. Palmer. There have been other great penmen, of course, but measured by their influence on the penmanship of their generation, there will be few to dispute the supremacy of these great names. Even were I competent to the task, I should not feel like making the sudden passing of Mr. Palmer the occasion for any comparison of the professional merits of these great leaders, What I would do, is to offer some intimate personal impressions of the interesting man who has left us, gathered during my nearly thirty years of association with him.

Mr. Palmer’s career from boyhood up is an interesting story, even to those who might not care particularly about his achievements as a penman and teacher. And the story carries in it a fine lesson for every youth of character who would learn the value of steady, tireless and enthusiastic devotion to a working ideal. It is the story of a life, dedicated with unchanging persistence to a single earnest purpose. Such lives have a high value, quite apart from the relative importance of the purpose itself.

Some time ago, I had occasion in a reminiscent Meandering to refer to a rather picturesque but important one-man and school-man named G. A. Gaskell, who, back in the seventies, held forth at Concord, New Hampshire. This fine penman and teacher became known to practically every teacher of writing in the country, and to many students of writing, as well, through the dissemination of an outfit of beautifully written copies, with an accompanying Manual of Instructions, which the author called “Gaskell’s Compendium,” and which he advertised widely through the “Youth’s Companion,” and other popular periodicals. At that time, I was an enthusiastic young Kansas public school teacher, and I got hold of one of these “Compendiums”, and at once became a devoted disciple of Mr. Gaskell, and his method. I promptly “junked” the old-time copy-books I had been using, and for a number of succeeding years, used the “Compendiums” exclusively in my work.

Well, to this Concord School of Mr. Gaskell, about that time, came Austin Palmer, a bright-faced, canny Yankee boy, with a burning ambition to be a penman. Probably, the boy was not over-endowed with this world’s goods. At any rate, he found it convenient to pay his thrifty way through the school as Mr. Gaskell’s janitor and chore boy. He appears to have been a good and steady student, leaving the school, not only a good penman, but deeply bitten with Gaskell’s own enthusiasm in the cause of good writing. Later on, I do not remember just when, he became the penmanship teacher in the late Samuel A. (sic) Goodyear’s business school at Cedar Rapids, Iowa. Here, young Palmer held his own so well, that later, when Mr. Goodyear embarked in the business of publishing commercial school books in Chicago, the young writing master was enabled to purchase the school at Cedar Rapids, and conduct it thereafter, as his own enterprise.

When I cam east in 1895, to take my place in the ranks with the late Charles Ellis, author and publisher, at Battle Creek, Mich., I began meeting at the conventions, the popular young penman of Cedar Rapids. He was already publishing his “Western Penman”, but I think, was not yet publishing penmanship texts. I found him, from the start, an interesting fellow and we became good friends. In 1900, my good friend and coworker, Charley Ellis, having passed away, I severed my connection with the Ellis Company, and formed a co-partnership with Mr. Goodyear, Mr. Palmer, and T. S. Metcalf, (a Cedar Rapids printer), under the name of the “Goodyear-Marshall Publishing Company.” Until the retirement of Mr. Palmer, from this company some two years later, to give himself wholly to his penmanship publications I was in almost daily association with him, and thereafter, for several years, was a regular contributor to his monthly, the name of which had been changed to the “American Penman.”

I soon found that Mr. Palmer was a most unusual man, with a number of diverging, but vivid and outstanding personal characteristics. He had a keenly alert, and quickly absorbent mind, learning little from books, but much from men and observation. No student in the ordinary sense, he leaped rather than plodded, but looked where he leaped and made few mistakes. He was a ready and accurate judge of men, and had a keen nose for efficiency and loyalty in choosing his lieutenants. He was thrifty and acquisitive, as are most Yankees, and drove good bargains, but was personally generous, and with no hint of the miser in him. He was no puritan, but clean-minded as a child, and without the least tendency to be a sport or a bounder, which was more than could be said of some others in our ranks in those days. I recall that once, during one one (sic) of our Chicago meetings, a select squad of prurient-minded ones made up a party to go on an obsercation (sic) tourney night down among the slums of South Clark Street. That was during the mayoralty regime of the elder Carter Harrison, and things were about as vile and “open” in that plague-spot of vice as they well could be. The next day, W. N. Ferris, C. P. Zaner, Mr. Palmer and I were lunching together, and I think that L. L. Williams of Rochester, was also present. It transpired that none of us had been invited to join the night party. I felt rather proud of the company I was in.

I shall probably meet with some disagreement, when I go on record here with the opinion that Mr. Palmer was, fundamentally, an artist. I do not mean, of course, that he was a creative artist, in the sense of artistic accomplishment. He never aspired, or even cared to be a “pen artist”, and none would think of ranking him as a penman, with men like Zaner, or Madaraz (sic), or Courtney, or Spencer. But there are many men in this world who are artists at heart, though they may never have wielded a brush or drawn a line. It is not technical accomplishment, but a deep and abiding sense of the beautiful, whether in nature or art, that makes the real artist. It was instinctive with Mr. Palmer to like and enjoy with the enthusiasm of a child, the things that are fit and charming in form and color. It was this in him that, as a boy, drew him to Mr. Gaskell’s beautiful writing. It was shown in his instinctive good taste in respect to every material thing about him, whether it might be the arrangements of a dinner-table, the correct details of his wardrobe, or the appointments of a school room or a business office. I once visited him shortly after he had bought his new home in Pasadena. I found him deeply absorbed in rearranging the shrubbery, and other features of the place in order to bring them into harmony with his sense of artistic fitness. At first, I though that Mr. players penchant for “nice things” in the way of dress, was inspired by a mere love of display, but I soon found that this was not it at all. He basked in the genial and artistic sense of having nice things about him for their own sake, and quite regardless of what other people might think about them.

Mr. Palmer liked to talk about his accomplishments and his material possessions, but he did it with the naive enjoyment of a child, although, to those who did not know him, it often seemed snobbishness. As a matter of fact, there was nothing whatever of the snob in him. He did not know how to “freeze” inferiors, which is the unmistakable ear-mark of a snob, but was always kindly and democratic to everybody about him, from the janitor up. He could put up a good fight for his convictions, and could be resentful, and mildly vindictive, where he though wrong had been done him, but there was not a taint of cruelty in him, and he was physically gentle, almost to the point of effeminacy. I never knew him to display anger or be threatening or violent, no matter what the provocation. When imposed on, he was more likely to register sadness than indignation. His sense of fitness never allowed him to forget that he was a gentleman.

Such, I think, is a just estimate of the qualities that marked this interesting co-worker who has left us suddenly, and who was known to so many of us for such a length of years. He led a blameless life, as men’s lives go, and through his usual work, left the world better than he found it. He was a very human man, and unique in many ways. It will be many moons before we shall look upon his like again.